More than 30 retired thoroughbred racehorses will showcase their new equestrian talents when they contest the Off The Track (OTT) Show Series Final in Bendigo tomorrow, Saturday, 5 January 2019.

The annual event is run in partnership with Racing Victoria (RV), via its popular Off The Track program, and Victoria Agricultural Shows Ltd (VAS) as part of the Victorian Saddle Horse Championships. 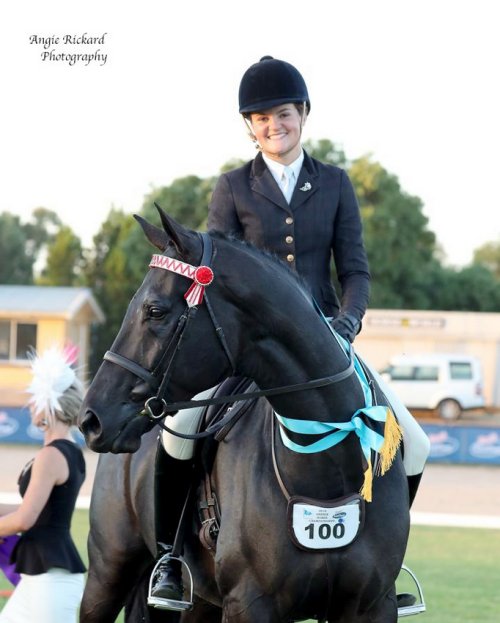 The Off The Track Show Series Final is only open to retired racehorses that have qualified by winning an RV-sponsored Off The Track class at one of the many VAS agricultural show events held throughout Victoria during 2018.

Among the horses contesting Saturday’s final will be blueblood thoroughbreds by leading stallions Octagonal, Lonhro and Zabeel to name a few.

Defending champion DP Amazing, who raced in Western Australia as Chesta Piniton and had 33 starts for three wins, amassing $20,558 in prizemoney, will line up in Saturday’s event, as will Bart Cummings’ former grand stayer Precedence.

Another strong contender in this year’s field is 2017 Garryowen winner SLM Mercedes, a Zabeel gelding who raced as Crosswind and had three luckless starts before retiring for a promising career in the show ring.

VAS Executive Officer Rod Bowles is delighted with the number and quality of entries for this year’s OTT Show Series Final.

“Some very prominent horses will feature in what is the pinnacle of the 2018 show year, where each horse has competed at a Victorian Agricultural Show to win the right to be a State finalist,” Bowles said.

“The partnership we have with Racing Victoria’s Off The Track program has gone from strength to strength and is helping to drive demand for rehomed racehorses.

“Excitingly, in 2019 we will introduce a led Off The Track qualifying class at all participating shows, in addition to the ridden, which will be the qualifying platform for next year’s State final competition.”

RV’s Equine Welfare Manager, Jennifer Hughes, said Off The Track thoroughbreds are currently excelling in a range of disciplines following their retirement, with a career in the show ring an ideal fit.

“Hundreds of Off The Track thoroughbreds with varying levels of racetrack success participated in the 2018 VAS OTT series across Victoria, highlighting the dominance of thoroughbreds in this discipline,” Hughes said.

“The VAS OTT Show Series Final is one of many initiatives undertaken by our Off The Track program which is dedicated to supporting retired racehorses in second careers.”

In addition to the main event, there will be an Off The Track Child's Thoroughbred Hack class run from 10am onwards on Saturday, with the winner receiving $150 cash along with a rug and a OTT merchandise pack.

The inaugural RV Off The Track Led Championship will see over 30 horse and handler combinations take to the arena with over $1,000 in prizemoney and merchandise on offer.

A notable entrant in the Led Championship, who will later that day also contest the ridden final, is Kathleen Mulan and her former former galloper Tide Up, who raced as Divinity and had seven starts before retiring a maiden.

The pair are in red-hot form coming off a recent win in the Spring Fashions Off The Track at last year’s Royal Melbourne Show.

The winner of the Off The Track Show Series Final will receive a $1,000 cash prize as well as a personalised horse rug and OTT merchandise pack, with the runner-up receiving $500.

An Off The Track Best Newcomer, eligible to promising, young show horses that have raced within the last two years, will also be awarded.

The ridden final event, to be held from 7pm at the Prince of Wales Showgrounds in Bendigo, will include a free BBQ dinner with racing fans, equestrian enthusiasts and the local community invited to attend.